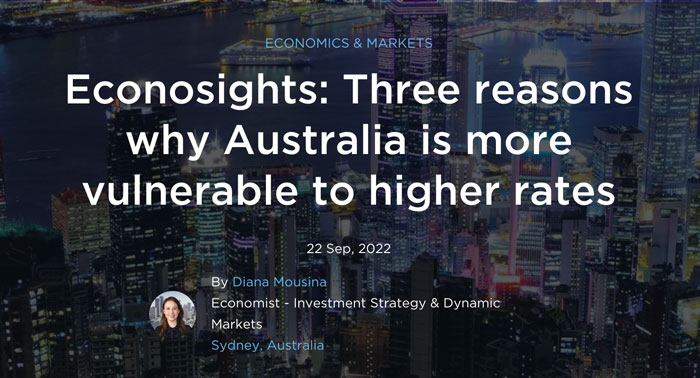 The impact of interest rate rises will hit consumers harder in Australia compared to some of our global peers. In the short term, this is negative for consumer spending in Australia but in the medium term it could be positive for the economy because it should mean that the RBA does not need to raise interest rates as much to get demand and, therefore inflation to slow. However, the risk is that the RBA is not giving itself enough time to see the impacts of rate rises done so far, so the cash rate could overshoot in the short term (although this could mean that rates eventually have to be cut by more if the RBA makes a policy mistake).

There are three main reasons for why we see rate hikes in this current cycle working faster in Australia to slow demand compared to our global peers.

1. Household debt is higher in Australia

A higher debt load (as a share of income) means that interest rate changes are felt more acutely. For example, a 0.25% increase in interest rates in the US is like the equivalent of a 0.45% increase in Australia for consumers with housing debt – given the relativities in household debt.

This means that each interest rate increase in Australia is more potent for the average household with debt.

2. A higher share of consumers are on variable mortgages in Australia and feel the impacts of rate hikes faster

In Australia, there is a larger share of mortgage holders who are on variable rates (which means that as the RBA adjusts the cash rate the mortgage rate is also likely to move in line with the cash rate). Historically around 85-90% of borrowers were on variable rates but the surge in fixed borrowing over the past two years has meant that the share of variable-rate mortgages is now around 60% of total outstanding loans. This means that fixed loans comprise around around 40% of total outstanding loans. Over the last 3 years, there was a surge in fixed-rate borrowing as households took advantage of record low mortgage rates (which came about because of increased competition between lenders, lower costs of borrowing thanks to the RBA’s Term Funding Facility and the RBA’s 0.1% three-year bond yield target and this led to fixed-rate borrowing rising to over 40% of new lending (see the chart below).

Households with variable mortgages feel the impact of rate hikes as soon as their minimum repayments change (which is usually 2-3 months after the RBA changes the cash rate) while repayments for fixed-rate mortgages do not change (until they roll-off with fixed loans usually available for a period of 1-5 years). Across our global peers, less consumers tend to be on variable mortgages (more on this below). And for those households on fixed-rates, the time that those mortgages can be fixed for is relatively short, between 1-5 years. So in Australia, there is a very high sensitivity of households to near-term changes to interest rates because of the faster flow-through to changes in repayments for households with debt.

The credit rating agency Fitch count “vulnerable” loans as those with a variable rate or a fixed rate that will expire or reset in the next 24 months. On this measure, Australia has the highest exposure to mortgages vulnerable to rate changes across comparable global countries (see the chart below) with 93% of loans vulnerable to rising rates (compared to 55% in New Zealand, 42% in UK, 24% in Canada and 1% in US).

3. There is a large number of households due to roll-off fixed mortgages in 2H2023

The big bank mortgage books suggest that the largest share of fixed-rate loans expire in the second half of 2023 and this means that households will roll onto a variable or fixed mortgage rate that could be 2-3 times their current fixed rate which is a big increase in debt servicing costs. These households make up around a quarter of the total housing credit stock.

So the question is then around the servicability of these mortgages, On the RBA’s own estimates, around 38% of households with a mortgage will see a lift in monthly repayments of 40% or more if interest rates rise by 300 basis points (the RBA has so far increased interest rate by 225 basis points), which is around 1.3 million households. This is a very large increase in housing costs for a good share of the population and is too large to be compensated by a rise in wages growth.

What has the impact of rate hikes been in other economies?

In this section we look at the impact of rate hikes in economies that have lifted rates by more than the RBA. The Reserve Bank of New Zealand has lifted rates by 275 basis points since October 2021. Retail spending has been mixed, with weakness in June and July but some recovery in August. Home prices are down by 5% since a peak in March 2022 and employment is flat/down in the last three quarters. But in New Zealand, household debt is much lower compared to Australia (at 122% versus 187% in Australia).

Canada probably offers the closest comparison for Australia because of similar levels of household debt. The Bank of Canada has raised rates by 350 basis points in 6 months (since March 2022). Activity data has started to weaken. Employment has fallen for the three months up to August, but retail spending is holding up for now. New home price growth has slowed significantly, and prices are down by 7% in six months (in Australia prices are down by ~5% since their peak), with prices having had a similar run-up to Australia (houses were up by 30% year on year). The difference between Australia and Canada is the lower share of variable-rate mortgages in Canada (compared to Australia).

We see Australian consumer spending growth slowing significantly in 2023, to around 1% per annum, well below its more normal levels of 3%. And this is assuming a lower peak in the cash rate compared to market and median economist expectations.

The structure of Australia’s housing lending (more variable rate and shorter-term fixed loans) and very high household debt (as a share of income) leaves Australian households more vulnerable to rising interest rates compared to some of our global peers. Interest rate hikes will work quicker in Australia to slow consumer spending compared to global counterparts like the US, Canada, UK and New Zealand. While Australia has lower inflation compared to some of our global peers like the US or Canada which is good for consumers, wages growth is also lower (it is 2.6% year on year in Australia versus ~4% in the Eurozone and ~7% in the US).

For these reasons, the RBA does not need to move in lockstep with the other major global central banks (especially as a large depreciation in the $A seems unlikely in the current environment of high commodity prices) and there is a case for the RBA to pause on lifting interest rates or at least to reduce the pace of tightening. Our view is that the cash rate will peak at a lower level of 2.85% than markets and economists are expecting (which is around 3.5 4%). This assumes two more 0.25% increases in the cash rate. The risk is that the RBA’s hawkishness sees it taking rates above 3% without waiting to see the impacts from current rate changes. But this would mean that the risk of a policy mistake increases and could see the central bank cutting rates more than expected later in 2023 (we already see 50 basis points of cuts in 2H2023).

Diana is an Economist within the Investment Strategy and Dynamic Markets team at AMP. Diana’s responsibilities include providing economic and macro investment analysis and contributing to the performance of the Dynamic Markets Fund.