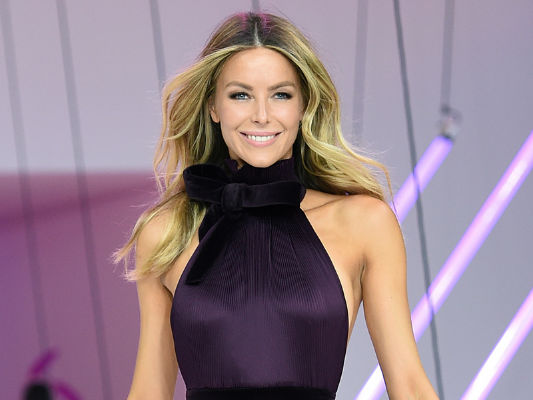 Jennifer Hawkins has been a face of Myer for 10 years and, as she walks in the store’s spring 2016 show in Sydney, she believes there should be no limit on how much she can “kick ass”.

Hawkins opens and closes the store’s largest show in Sydney on Tuesday walking alongside 71 models and in front of 1000 people, the biggest audience at a Myer fashion show yet.

She’s also signed on as a face of the brand for another two years – it’s a long career in the fashion industry, but she doesn’t believe in superficial limitations.

“It’s different, in a way, because I’m representing the brand and more endorsing Myer as a brand not just as a model, so I guess there shouldn’t be any age to anything. You should just kick ass in life in general.”

The decision to sign on for another two years was an easy one for the model because she loves it.

“And it felt right and I’m happy and healthy and just wanted to keep going. It was mutual so that was important.”

Hawkins will showcase an impressive five looks throughout the show, opening in a black evening gown by Melbourne’s Toni Maticevski and closing with a sequinned, black mini dress by her Australia’s Next Top Model colleague Alex Perry.

She also confidently opens the swimsuit section in a breton-striped bikini by Cozi, but that didn’t mean she went light on the carbs in the run up to the show.

“It was different this time because I’ve just come back from Italy and the Maldives on a bit of a holiday because I had such a crazy period with Australia’s Next Top Model,” she said.

“So I was exercising every day so I could eat what I wanted over there, lots of pasta and beautiful food. So I didn’t deprive myself but I exercised like crazy because I kind of enjoy that as well.”

Hawkins said she’s been focusing on a mixture of resistance training and running for the best results.

Hawkins is joined at this year’s show by another international name, Sydney-born model Fernanda Ly.

The distinctively pink-haired model is currently working on Louis Vuitton’s campaign, and has been for three seasons from her base in New York, but flew home to be a part of the Myer spring show.

“It feels great because I’m back home and I get to work with all these Australian designers and models. It feels so comfortable,” she said.

“The Aussies are more laidback. Overseas they say ‘Oh it’s got to be perfect’, but it’s perfect here and everyone is easy to work with, and we all have the same accents, it’s really comforting.”