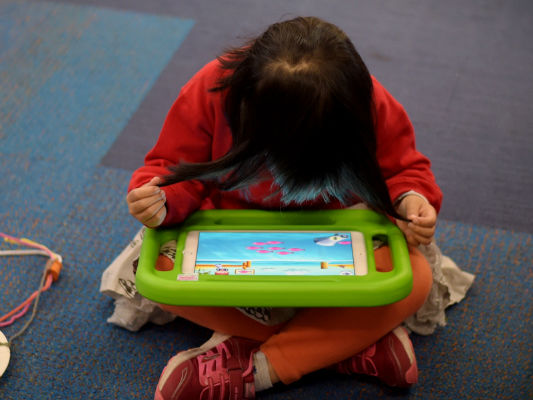 Going under general anaesthesia for the first time is a frightening experience for anyone, especially a child.

Anxiety levels are sky high as the child arrives at hospital for surgery and often sedatives are used to clam the nerves.

But new research has found the iPad is just as effective at alleviating pre-surgery anxiety.

Parent’s anxiety is lowered too.

Presented at this year’s World Congress of Anaesthesiologists (WCA) in Hong Kong, the research showed distracting children aged 4-10 with age-appropriate games on the iPad had the same effect as midazolam – a sedative commonly used before anaesthesia.

Midazolam is in the same family of valium-type drugs and generally makes most kids relaxed and little bit forgetful.

“Our study showed that child and parental anxiety before anaesthesia are equally blunted by midazolam or use of the iPad,” said Dr Dominique Chassard.

In fact, the process of putting the child under general anaesthesia, as well as parental satisfaction, were judged better in the iPad group.

Head of Anaesthetics at Sydney Children’s Hospital, Donald Hannah says the use of midazolam can keep a child in recovery for a little longer but it does not increase the risk of complications during surgery.

He supports anything that will empower a child and make their surgery experience a positive one, but says the use of iPads won’t work on all children.

“You will get some kids that just won’t have a bar of it, whereas some kids will just be televisionholics and as soon as you put a screen in front of them they don’t care about anything else, for those kids its awesome,” Dr Hannah said.

“Some kids just get stressy about the feel of the mask on their face … and just hate being in the whole environment and get very stressed.

At Sydney Children’s Hospital iPads are already commonly used in a variety of ways as a tool to support kids, says child life therapist Jessica Tascone.

“We know that surgery has been reported as being one of the most frightening times for a child when they come into hospital, so we recognise that the stress and anxiety hospitalisation causes children and their families.”

She says the iPad adds an added layer of support for children.

“We know that adding play and distraction to a child’s journey to surgery can make their experience a more positive one.”