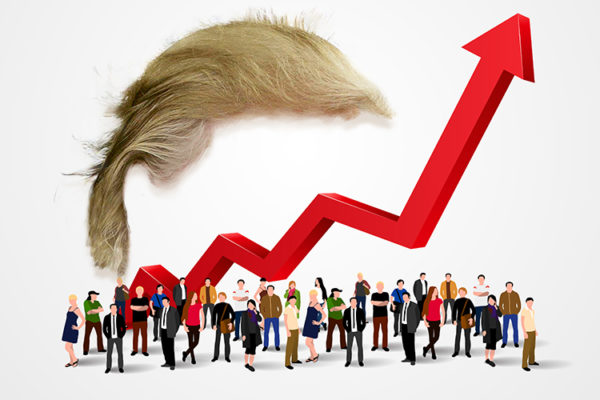 If you had bought into the ASX at the end of last Wednesday, when it was clear that Donald Trump had been elected US President, and had sold on any day since then it is likely that you would have made a profit.

Market gyrations worldwide since the surprise result have been on the same pattern: an initial fall followed by a bounce as people woke up and realised the sky hadn’t fallen, and life and business would go on.

After dire forecasts that global markets would crumble in the event of a Trump victory, this week they are moving higher on optimism that the casino and hotel mogul will be good for business.

The market’s rise has also been helped along by rising commodity prices.

Oil, copper and unfashionable coal – which is now booming – are pushing resource and energy shares higher.

BHP Billiton, in fact, is now tipped to boost its dividend by more than 60 percent this year as a result of the resurgence in commodities.

One commodity, however, which has been on more of a roller coaster is iron ore. After surging 22 percent in November, the iron ore price has come back to earth, falling a steep 9 percent in recent days.

This clouds the outlook for pure iron ore plays such as Fortescue and Atlas, and won’t be great for Gina Rinehart’s position on the world rich list, and could even spill over to diversified producers such as Rio Tinto if the fall continues.

Markets are still volatile, as the Reserve Bank of Australia has warned. The RBA is worried about high levels of household debt if markets turn ugly.

Our debt is now at an average 185 percent of annual household disposable income, up from only 70 percent in the 1990s.

This presents a dilemma on interest rates, because if rates start to move up then there will be casualties among homeowners.

The Australian dollar, meanwhile, has been trading lower post-Trump, down from US77 cents to US75 cents.